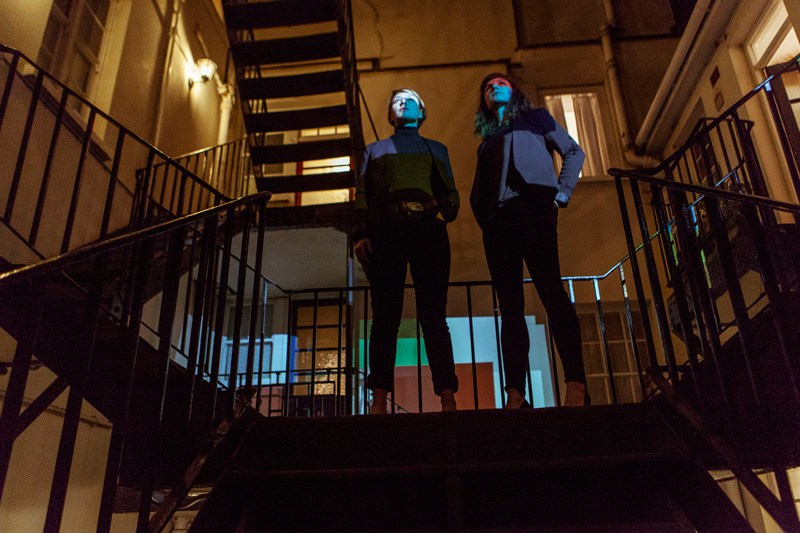 The Way We Live Now – in Norwich
Dyad Creative
Award winning artists reveal new project at secret city location – and you can be there!

New digital artworks featuring Norwich residents are to be revealed at a secret outdoor location near Norwich Arts Centre on Wednesday 7 December 2016 as part of The Way we Live Now, a visual art project that seeks to engage with the community and architecture of our city and provide free cultural experiences showcasing local artists.
​
The project is the brainchild of Théodora Lecrinier and Hannah Turner Wallis, a Franco-British collaboration that work together as Dyad Creative. The duo, who were winners of the Visual Art Award at this year’s Norfolk Arts Awards, have been collaborating for the past six months with artists, photographers and digital artists to create a unique record of people and places in Norwich. Subjects were photographed and then the portraits were passed to 4 visual artists and 3 digital artists to treat creatively.

A narrative for each film has been written by Norwich author Megan Bradbury who had her debut novel published this year and was introduced to Dyad by Writers Centre Norwich. Megan also wrote the text for this year’s Norfolk & Norwich Festival event Walk With Me.
‘This is very much a trial run of a work in progress’ said Dyad co-director Hannah Turner Wallis, ‘But we are really proud and pleased with the results and wanted to get it out there and show people what we are creating’. ‘People’s reactions and thoughts are very important to us’ added fellow co-director Théodora Lecrinier ‘It’s about our city and while we want to challenge people’s preconceptions we also need their views and feedback’.

Following the 7 December preview Théodora and Hannah will build on their work so far to create an art trail across the city, providing an experience that strengthens a sense of pride in the city and the people who live in it.

The ultimate aim of The Way We Live Now is to create a platform that can travel to any city across the world, working with local people and artists. ‘Our goal is to tour regionally, nationally and even internationally’ said Théodora. ‘We want to create a project that allows people to become a part of the process, take ownership and find identity within the city they are participating in’ explained Hannah.

Dyad Creative was founded in 2014 by Théodora Lecrinier and Hannah Turner Wallis, after both were students at Norwich University of the Arts, seeking to focus on the visual arts and contemporary performance. Questioning what performance is, Dyad explores notions of communication and social engagement through diverse art projects involved with the process of making and interacting with space and people. They also run Dove Street Studios and The Barber Shop, creative spaces in Norwich that provide a platform for other artists to develop their practice. These are affordable city centre spaces for performance, residency, studios, courses, workshops and facilitating new projects, inspired and driven by space, audience and active practice.

Norwich Arts Centre Director Pasco Q Kevlin, said ‘We’ve been involved in The Way We Live Now since its conception and we’re extremely pleased to be presenting the first stage of the project here at NAC’.

Chris Gribble of Writers Centre Norwich said ‘Dyad is a young and exciting pairing that has already made waves in Norwich and Norfolk with their capacity to bring people/communities and artists together.’

The Way We Live Now is being created in partnership with Norwich Arts Centre, Writers Centre Norwich and Norfolk & Norwich Festival as well as the support of Norwich City Council and Norfolk County Council.

Those interested in attending the event should gather at Norwich Arts Centre from 5.30 on 7 December. Dyad will take groups to see the film on location (which lasts 15 minutes) at 6pm and 7pm with a talk at 6.30.