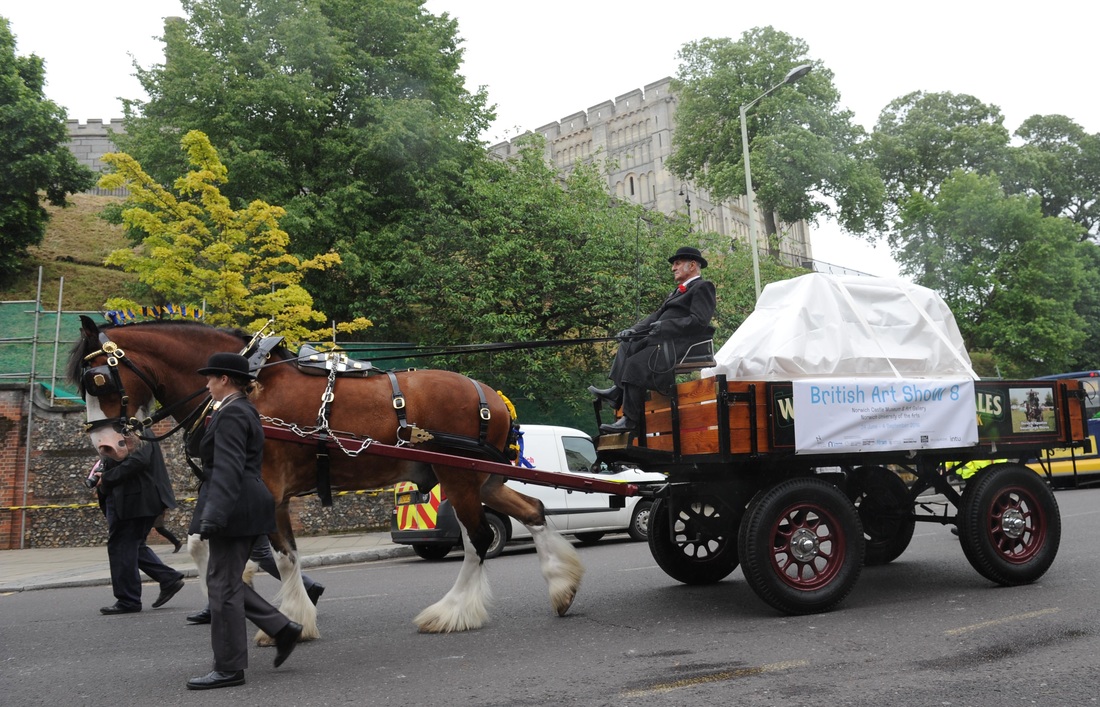 British Art Show 8, the UK's most prestigious and influential exhibition of contemporary art arrived in East Anglia for the first time in its 40-year history.

Entitled 'The History Train' the event married East Anglia's rich agricultural past and Norwich's historic tradition of horse parades at the beginning of the 20th century with brand new contemporary art.

Crowds in Norwich’s centre watched with awe and delight as the horses made their progress around the streets.

Great Yarmouth and London based artist Alan Kane walked with the parade and after the event commented: “I am thrilled. When you have these ideas you have no idea how they are going to work out but this one exceeded my expectations. The organisation and execution were both brilliant.”

Following the conclusion of the parade the members of the public, whose designs had been chosen for the horse brasses which adorned the History Train horses bridles (martingales), were treated to a celebratory tea and able to witness their horse brasses, which had been made by Alan Kane, being put on display.

The horse brasses will remain on display for the duration of the British Art Show 8 exhibition in Norwich and will be officially accessioned into the collection of Norfolk Museums Service in a ceremony later in the summer. Among the horse brass designers present were Georgia Harvey, Lauren Revell and Lily Ellaina Bailey (all aged 12) from Great Yarmouth High School who were all ecstatic to have been chosen to be part of such an historic event.

Steve Miller, Head of Norfolk Museums Service, addressed the group in Norwich Castle including the Sheriff of Norwich (Richard Marks) and Mayor of Norwich (Marion Maxwell) remarking that he was delighted that “Norwich has been able to deliver such an individual and quintessentially Norfolk event to mark this important moment, the arrival of British Art Show 8, in the cultural life of the region. The History Train was a truly inspiring experience. It required a huge team effort but we are thrilled to have successfully delivered this spectacular project and Norwich should be particularly proud.”

Despite the drizzle it was a fun filled day. Members of the public were able to engage with the parade at all levels and particularly enjoyed seeing the horses at close quarters and talking to the grooms and drivers at the Forum following the conclusion of the parade.

At Norwich Castle further horse related events took place during the day including talks about great East Anglian horse artist Alfred Munnings, a show and tell session on the evolution of the horse, a “canter round the castle” horse trail and the opportunity to say hello to a real live Suffolk Punch “Bowler”, who chomped his way through bales of hay on the Castle mound.

In addition seven couples, who were married at the Castle during the day were each presented with lucky horse-shoes which had been specially made at Gressenhall to commemorate The History Train Parade.

Professor Neil Powell, Pro-Vice Chancellor of Norwich University of the Arts, also commented: “British Art Show 8 is an exhibition of national and international importance and we are thrilled that Norwich has heralded its arrival in the city in such a unique way and one which enabled members of the public to really engage with what is going to be a terrific show. We are unlikely to see the likes of such an outstanding display of contemporary art in the region again for sometime.”

British Art Show 8 opens to the public on June 24 until September 4 2016 and is expected to attract 75,000 additional visitors to the city and the region.

For more information about British Art Show 8 please see www.britishartshow8.com and for a comprehensive round-up of all the art news and many visual art events taking place in Norwich and across Norfolk this summer please see www.artinnorwich.org.uk