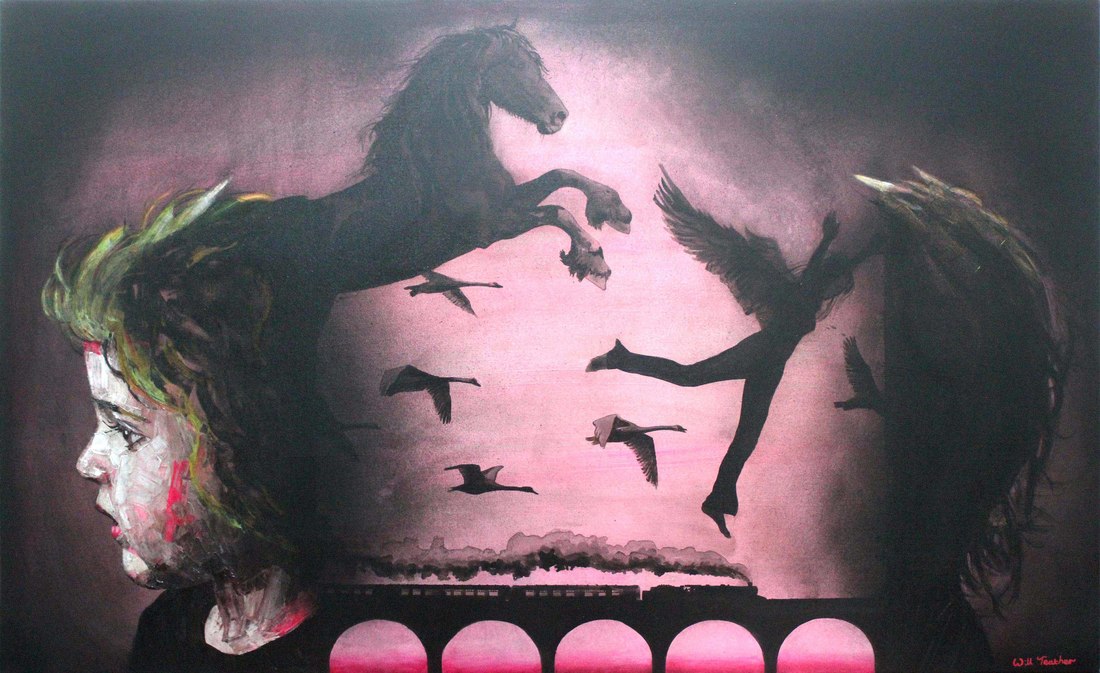 Will Teather: The Doors of Perception
Exhibition at Norwich Arts Centre

Opening Night Wednesday 10th January 6pm – 8pm, with catering provided by Norse.  Free entry.
Followed by a performance by the artist's band, The Vicars of Stiffkey, plus support.

You are invited to my exhibition launch at Norwich Arts Centre from 6-8pm, followed by the chance to see a performance by my band The Vicars of Stiffkey, plus support acts, in the auditorium. Always shambolic, always enjoyed.

On display are a mix of artworks including my recent adventures where I continues to explore how to reinvent key principles within realist painting such as sacred geometry and perspective. Other themes include escape from modern life, such as my pastel drawings of flying office workers and expressively painted portraits, where the sitter’s head opens into a detailted sillouette that reveals their subconscious thoughts.

The exhibition is free entry and runs until 31st January, Monday- Saturday. If you decide to stay for the band, tickets are £6.

About the artist & the band:

Will Teather’s work has been exhibited internationally to acclaim, with recent exhibitions including as a guest artist for Artrooms London, Artwars at Red Dot Miami and as a finalist in the London Contemporary Art Prize. His work has been collected widely and in 2015 broke the sales record for the Other Art Fair, one of London’s leading events for upcoming talent. His studio is based in Norwich, where he is an Associate Lecturer in drawing at Norwich University of the Arts. He is the Artist-in-Residence for Norwich Arts Centre, following on from previous residencies with venues in New York and Aberdeen.

Also a musician, Teather has fronted a succession of bands over the last ten years, the latest been the Vicars of Stiffkey: a psych-rock band that recently signed to Off With Their Records with their first release, Live & Uncassocked released in June 2017.

Other Vicars including legends from the alternative music scene in the East of England: Tom Conway, Shane O’Linski, Dave Inge and Dominic Redsell.